Hogs and Turfgrowers team up for challenge 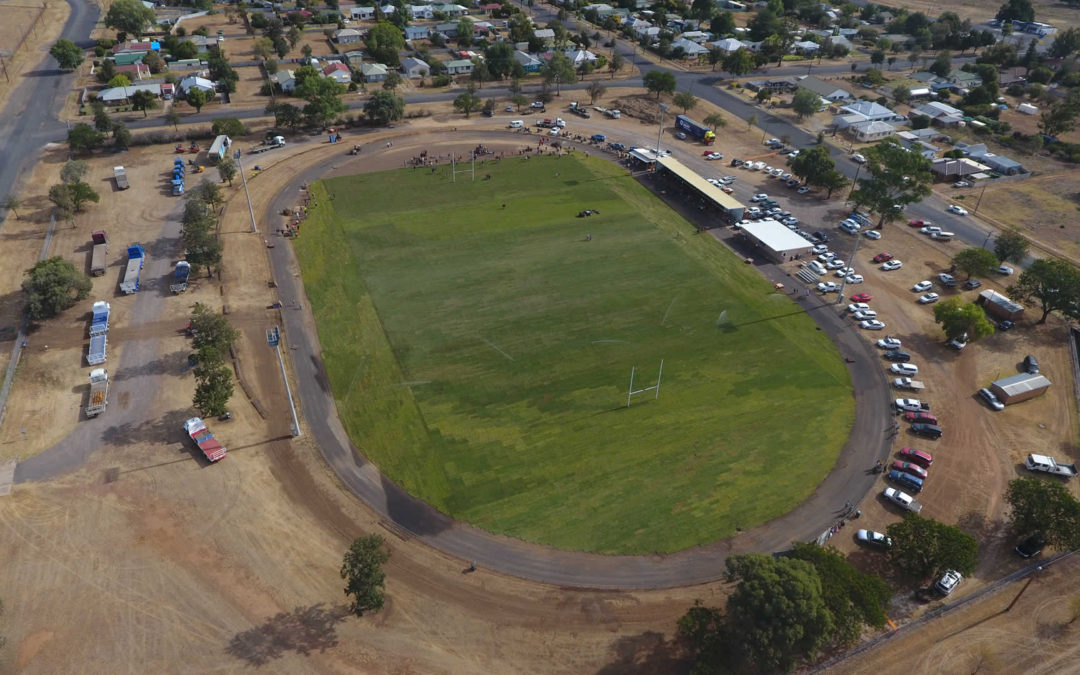 Australian Turfgrowers can be a generous lot, often going above-and-beyond when it comes to supporting their local community.

From Backyard-Blitz’s for someone doing it tough, through to a bit of turf to help out the local Pre-School; most Australian Turfgrowers could rattle off a number of projects they’ve had a hand in over recent months where a sizeable donation has been more-than-likely been made.

It was no real surprise recently then; how a group of growers put their collective hands in their pockets to help out another worthy cause. It was the size of the donation and the work carried out on this occasion however, that was staggering to say the least.

Headed up by Evergreen Turf NSW and Dad ‘n’ Dave’s Turf Supplies’ Graeme Colless and David May, the pair were again involved in bringing together the turf, equipment and knowhow to once more help out in returfing a football field – with everything donated from soil, through to irrigation and turf.

What started as an ambitious project to re-turf a footy field at Walgett in Norther NSW last year with around 7,500 square metres of turf, was backed up again this year with nearly twice as much in the offering.

All up with the local community and footy club’s involvement, around two hundred people and a little over two hours saw 13,500 square metres of Kikuyu turf hitting the ground in Wellington, Central West NSW, late last month.

Teaming up with the National Rugby League (NRL) NSW ‘Hogs for the Homeless’, the work was timed to coincide with their sixth-annual motorcycle journey around NSW. The Hogs for the Homeless tour is a charity program run under the banner of the NSWRL Foundation that has raised some $600,000 for Father Chris Riley’s ‘Youth off the Streets’ Charity.

The Hogs crew also worked with the NSW Koori Under 16 side whilst they were there as part of a unique build-up to their Charity Shield curtain-raiser to be held at Mudgee the following weekend.

Speaking on the day, NRL legend and newly named State of Origin Blues coach Brad Fittler, said how he started ‘Hogs for the Homeless’ a few years ago with fellow player Nathan Hindmarsh.

“The idea was to get a bit of money together for father Chris and just as important is to get out into the community and work with the kids – give a few footies away and we’re looking forward to doing that today.”

“Basically we’ve set up a vehicle so that anyone who wants help a really good cause – if any wants to have a crack and help in detouring the lives of some of these kids for the better, especially in a place like Wellington, then we’re providing the means to do it.

“Because of this man and his gang of turf farmers, they’ve set a pretty good example to get out here and lend a hand and get involved with the community spirit; they may just help turn a few kids in the right direction,” he says.

Evergreen and Dad ‘n’ Dave’s Turf had six of their staff on site with gear and equipment for nearly a week in order to get the paddock properly prepared. Deep Ripping the old field, cultivating, incorporating 200 tonne or so of new soil and working with Dubbo Council on new irrigation also donated by Toro, was appreciated by all involved in the project.

Also a long-time supporter of Youth off the Streets, Graeme Colless has been the driving force behind the initiative in regards to the turf growers and hopes to inspire community regions in NSW.

“We see this as a great opportunity to put back in – we do pretty well out of the industry in the main and this is something we can get behind as a group and help make a real change.

“I ran into Freddy about three or four years ago and we’ve been great mates since. He’s helped out with a number of our charities and now we’re able to help out with his Hog’s Tour.

“We’ve committed for five years of this and it’s a massive effort for these growers to get behind us – we will have kicked in somewhere around a million dollars’ worth of turf and gear by then,” Colles exclaimed.

He also tells the background of how the Turfgrowers involved have come together to make it happen in the makings of the newly formed Greenspace Turf Cooperative.

“Apart from Dad n Dave’s Turf and Evergreen NSW, we’ve got Hi Quality Turf, All Seasons Turf, Turf the Lot, Dubbo Turf Supplies, Southern Cross Turf, AView Turf and Empire Turf who have all contributed so much and now most of us are working together towards a single banner of the Greenspace Co-op.”

“There’s few if any other growers outside this group that could pull together like this so well and especially all donated,” he says. “It’s this type of co-ordinated and unified approach that we see the co-op will service a number of needs in the market, especially sports and commercial,” he went on to say.

”I want to thank all the growers especially and everyone else that’s kicked in to help out in what was a massive exercise of generosity on everyone’s part.

“I can’t wait to see what this group gets up to for next year,” he says with a grin.